(Ce blogue a été écrit en anglais et n’est pas encore traduit) Why the plane? It got your attention, so it’s working!  The North Cobalt Flea Market is known for its variety of products and deals, however, occasionally tourists needed extra directions to find this gem. This is how the plane, roughly half the size of true-to-life Spitfire, was born.

Owner of the North Cobalt Flea Market, Marc Dessureault, wanted a landmark that would catch everyone’s attention just like the big cow in Dymond or the train at Weber’s in Orillia. He wanted something truly Canadian, but different. The landmark was intended to draw people in and represented to eclectic nature of the flea market.

When working with local artist, Mike Camp of Haileybury, many ideas were tossed around for the store’s landmark. A lot of the truly Canadian ideas were already taken, as Mr. Camp had already designed and constructed the famous bison for the Earlton Zoo and the enormous fish in Marten River.

The other reasons the Spitfire was chosen, versus a bear or moose, included our war history with the plane, the store’s overseas buying, and let’s not forget people’s fascination with planes in general. The Spitfire played a pivotal role during the Second World War and was manned by many Canadian pilots.

Each year, the flea market owner travels to China to purchase goods for his store. Although this flight is not in a Spitfire, he still marvels at the power and ability each plane has. This one plane can carry hundreds of people, plus the cargo, during a fourteen-hour flight to China non-stop. This is why planes are truly fascinating to people and this is why the Spitfire was chosen as the North Cobalt Flea Market’s landmark has become a part of the community.

People are always surprised that a flea market travels oversees for its purchases just like the big stores. To be able to offer a wide variety of competitive products, the Dessureaults just don’t have a choice.

What You Will Find At The North Cobalt Flea Market 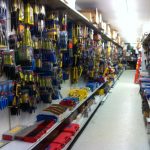 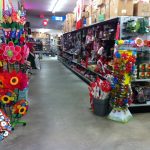 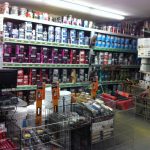 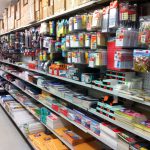 You can view their latest deals and learn more about the North Cobalt Flea Market on their website.

A Bit of History

After the closure of the Sherman Mine in 1989, Larry & Reina Dessureault decided to open a general store that they would name the North Cobalt Flea Market. At the time, it was designated as a flea market as this was the only way it could be opened on Sundays. The store became a well-known destination for locals and visitors.

Most of the employees at the Flea Market are bilingual. This is important to the owners as the store attracts people from all over the place – locals, people from the Quebec side, visitors travelling along Highway 11. When you walk in the store, you have this friendly atmosphere and really people are there to help you.  The Flea Market as a staff of 10-15 employees. the place is not fancy but if you looking for something, the chances are you will be able to find it. A few months ago I was looking for small screws to repair my glasses. I wasn’t really expecting to find any but yes, it was available! You can always visit their web site to find out about the latest deals.

How to Get There

The Flea Market is located along Highway 11B in Temiskaming Shores, in the community formerly known as North Cobalt, between Haileybury and Cobalt. It is along the main road and you will certainly not miss the plane. You can’t drive by the Flea Market without noticing it!