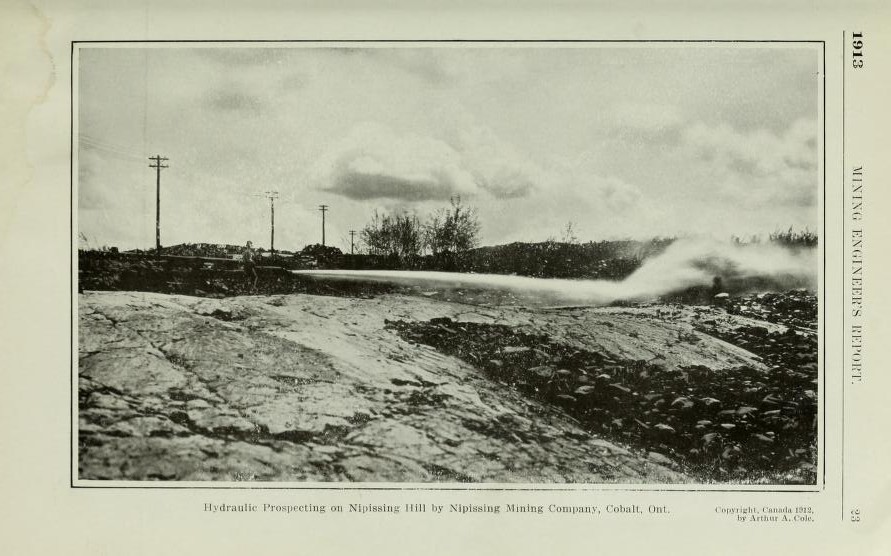 (Ce blogue a été écrit en anglais et n’est pas encore traduit) Where had all the trees gone! And the vegetation! How had I suddenly traveled from the shinning blue lakes and towering green pine trees of Temagami to the far side of the moon!  It was 1975 and this was my first encounter with Nipissing Hill on the east side of Cobalt Lake. It was amazing.

The hill consisted entirely of barren rock, deep crevasses, and rubble. There wasn’t even any moss or lichen. Scattered about the scarred landscape were rusting tin-covered head frames and the concrete remains of forgotten mills. Farther east some small lakes had been completely filled with mill tailings and the wooden trestles that use to dump the tailings into the lake rotted in the sun.

I later learned the incredible history of Nipissing Hill. In 1912 the Nipissing Mining Company wanted to ensure that its prospectors had not overlooked any silver veins on the hill and decided to wash all the topsoil, which was an average depth of 1.2 metres, down the steep slope and into Cobalt Lake. Using a 650 horse-power motor that created a highly pressurized stream of water, the miners removed the soil at the rate of six acres per month. Beginning at the bottom of Nipissing Hill the ground was washed bare and then thoroughly examined. The next area farther up the hill was similarly cleared, and the covering material washed into the lake. According to the local newspaper, people came from all over to watch. “An electric pump raises the water from Cobalt Lake, and a stream which would cut a man in two as quickly as if struck by a power buzz saw is hurled against the overburden with such tremendous force that anything moveable in its path is torn from its resting place. The earth mixed with water flies in clouds before the stream, pieces of rock are hurled some distance away, and the tree stumps are up-rooted and driven away by the force of the tremendous stream.”

The entire hill was scoured to bare rock, and would remain so for eighty years. A local physician wrote of Cobalt Lake later that year, “Formerly the water used to be tolerably clear; now it is a tainted or a yellow green, and is opaque, due largely or wholly to the powerful water hydrant of the Nipissing Mine clearing away the earth and clay from the surface of the Nipissing Hill. Moreover, there is a portion of the south end of the Lake now being rapidly filled up by the slimes or tailings from the mills.”

When I returned to Cobalt thirty years later many of the areas I had visited earlier were now protected by fences, and I was warned that if I ventured into some areas it was best to back out slowly if I felt the ground sag under my feet. The alternative was as a potentially fatal fall down a crevasse, abandoned mine, or collapsed stope. Although there were now a few scrub trees and vegetation growing on Nipissing Hill, it was mostly a barren landscape. Cobalt Lake was now almost completely divided in two.

Fast forward to 2016. Cobalt had changed considerably. There is a walking trail that explains the town’s history and several parks with mining equipment scattered about them with explanatory signage tell the story of silver mining’s past. If you take the Heritage Silver Trail walking tour, the Nipissing Hill Lookout and the Nipissing “81′ Open Cut are identified stops.  Although mining activities still left their mark on Cobalt, it wasn’t as evident as it had been. Twenty-year old trees, grasses and other vegetation had somehow found enough nutrients on Nipissing Hill to survive. The surrounding area, however, is still littered with head frames, mounds of tailings, and mill foundations, but here too nature has begun to reclaim the land. Lakes filled with tailings that I had once eagerly taken pictures of were now more difficult to find thanks to several revegetation projects and the mines’ remediation efforts.

I wonder what the mining landscape will look like in another ten years!!

This culture & history blog post has been written in May 2016 by Douglas Baldwin, a volunteer collaborator to the Destination Temiskaming blog and author of over 40 books on Canadian history. To learn more about Douglas.